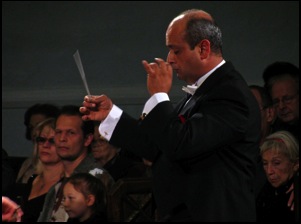 Conductor, Professor
Worked with Armenian Philharmonic Orchestra as the Artistic Director and Principal Conductor in 1998-1999.

He graduated from the Composition Department of Yerevan Tchaikovsky School of Music in 1984. Upon graduating he continued his musical education at the Yerevan Komitas State Conservatory, where he earned his MM degree in 1989 from department of Opera-Symphony Conducting under instruction of Professor Hakob Voskanyan. In 1991 he finished his post-graduate studies under the guidance of Maestro Ohan Durian. From 1985 to 1990, he was improving his conducting skills with Professor Ilia Musin at St. Petersburg Conservatory. In 1996 M. Avetisyan participated in the 35th Kirill Kondrashin Conductors Master-classes in Holland with Sir Edward Downes and Peter Eotvos. Mr. Avetisyan taught conducting in Yerevan Komitas State Conservatory from 1991 to 1997. From 1991 to 1997, Mikael Avetisyan was the conductor at the Armenian National Radio and Television Orchestra as well as the Orchestra of the National Academic Theatre of Opera and Ballet. From 1994 to 1997 he was the principal conductor of the Yerevan Symphony Orchestra and from 1997 to 1998 he was the Artistic Director and Principal Conductor of the Armenian Philharmonic Orchestra. M. Avetisyan successfully performed in USA, France, Holland, Greece, Spain, Russia, and Turkey. He has conducted number of European Orchestras and the USSR Symphony Orchestra. His recordings with Moscow Symphony Orchestra were released in 1996 on the RCD. Nowadays M. Avetisyan is the Artistic Director and Principal Conductor of the Glendale Philharmonic (USA) since the inception of the orchestra.