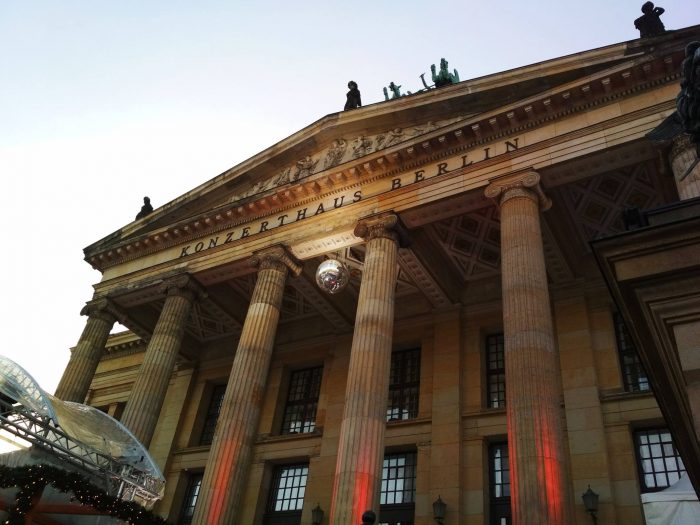 The Armenian National Philharmonic Orchestra triumphed under the baton of Eduard Topchjan at their sold-out concert, hosted by the Armenian Ambassaor in Germany and attended by Armenian’s president, Armen Sarkisyan. The concert, at Berlin’s Konzerthaus, was given to commemorate composer Aram Khachaturian’s 115h birthday. Playing to a packed hall, and with celebrated soloist Sergei Khachatryan, the orchestra’s long awaited Berlin debut surpassed expectations.

The concert opened with a stylistic interpretation of excerpts from the composer’s Spartacus ballet suite. The orchestra showed a lightness of touch and responded immediately to the almost imperceptible gestures by Topchjan.
Sergei Khachatryan’s performance of Khachaturian’s infrequently performed violin concerto was virtuosic. He galvanized the orchestra and the audience with his energetic and powerful rendition, bringing an unmistakably Armenian interpretation to Khachaturian’s colourful melodies. After a swift and incisive first movement, he expressed the doleful tone of the Andante sostenuto with impassioned playing, before dashing off the joyous last movement with zest and virtuosity, not forgetting an extraordinary cadenza.

After the interval we were treated to a powerful and compelling performance of Shostakovich Symphony No.5. Under the clear and concise baton of Topchjan, the ANPO evoked the raw and brutal atmostphere of Stalinist Russia.

Topchjan’s forceful intent was demonstrated from the first stroke of the baton – the strings elegiac in nature, yet with a cold steel underlying brutality, delivering the initial canonic figure with intensity. Topchjan’s 18 years of training this orchestra has produced a cohesive and distinctive string sound that he controls with minimal yet effective gestures. The woodwind excelled in the dreamlike final passage of the first movement.

The Scherzo had an almost Mahlerian nature to his rendition; Topchjan encouraged the horns in their raucous rendition of the Landler. There was a sharp bite to the pizzicato strings, and the concertmaster’s solo was cheeky and coquettish, creating the intended spirit of irony.

The Largo was, by turns delicate and passionate. This was played with pathos, and again the woodwind shone, with especial credit to the mellifluous tones of the oboe and flute. Topchjan’s interpretation felt more meditation than lament, until we reached the flute melody, accompanied by hushed tremelando strings, where Topchjan created a desolate, lonely soundscape.

Topchjan’s choice of tempo for the finale was a high adrenalin march that surged ahead. The orchestra showed itself to be capable of virtuosic playing. Particular credit should go to the blazing brass section, especially the trombones, who gave a bravura performance.

Overall this was an intense, electrifying performance, which encapsulated the despair of Shostakovich’s political and artistic struggle. The Armenian National Philharmonic Orchestra are definitely an orchestra to watch.